First some boring facts: The Solomon Islands have a lot of islands with about 600,000 people living on them. Being very west in the Pacific, close to Australia, most people are Melanesian, like people from Vanuatu and Papua-New-Guinea and much blacker than the Polynesians. They speak pidgeon, which is part English. They say "Look'm you" (means see you) and Goodie (good night). They have the highest mortality rate in the world caused by Malaria. I witnessed two children in the hospital dying of it. Only about 1 out of 8 women did not have a child that died. It is terrible, but this is a kind of normal part of live here...But people are again, again, again very friendly. We can really learn a lot from these people. They are happy with what they got and are genuine friendly and do everything to make you happy...And they are very very very patient; me too now...a bit.

The Solomons try everything to keep tourists away: corrupt government, very little infrastructure for tourists, riots in 2005 in the capital (now very peaceful), airlines and ships that are more often in repair than in service and a few months ago and the best try: an earthquake/tsunami. And I forgot mentioning the food: basically terrible: if kasave, two minute noodles and a variety of plant products is your thing, you are in he right place...But the worst was that I only found two internet places in three weeks...the ammount of problems I encounter is immense...

Highlight of "adventure" was trying to get a boat from one island to the other: no boat: engine problems. Plan B: take a plane; But too bad, problem too; Not an option because the runway was to wet. Normally not too big a problem, but when the runway is grass... By the way, before attempting landing, the goats, that are responsible for maintaining the runway, are first removed. So, plan C, with a small boat to an other airport. I got on the plain and everything seems OK. The pilot informs us he will "try" to land and "hopes" it will be OK (still because of the rain). So, to my big surprise, we had a safe landing. relieved I get off the plane. Until I notice the plane is moving back to the runway, with my luggage still on board! So, the Solomon airlines guy and I risk our lives by jumping in front of it, stop it and take the luggage out. In the process, we break the hatch. Half an hour delay. An Australian surf dude eventually repairs the hatch with a piece of rope...But, what we (espec. I) learnt, that in the end (almost) everything works out just fine. By the way, also interesting is how they fuel the plane. A guy literally pumps fuel into the plane, assisted by a fire extinguisher for just in case. 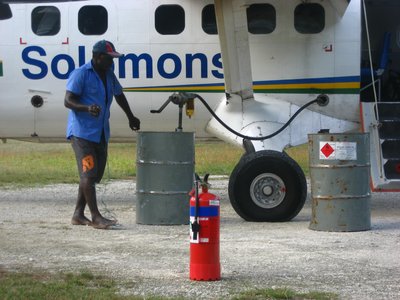 So, what about the Tsunami. Basically, a combination of the Tsunami and earthquake destroyed a lot of houses and killed 50 people on the "dive island" Gizo. People are now living in the hills. Hundreds of Unicef, red cross, save the child, etc. people help building tents and restoring houses and water supply. I (the only tourist) still went to Gizo to show a little bit commitment/support, by still spending a little money there. Fish life is very good, but corals are smashed. I hope the village will survive...

So, after all this, why then is the Sollie's my favorite place in the Pacific? Well; the raw adventure and the rewards in the form of unbeatable nature are immense!!! On all islands I saw hundreds of sharks while snorkeling and diving: black tips, 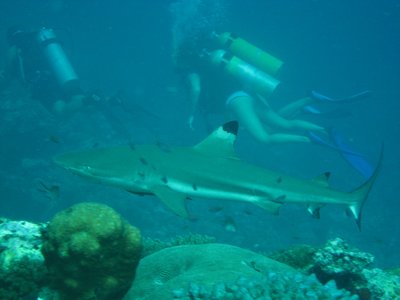 white tips, grey reef, grey whalers and even the ellusive bronze whaler. Incredible, the blacktips came right to the beach and swam around my legs. 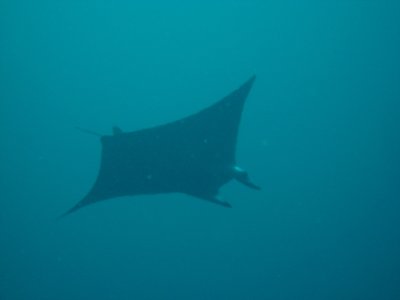 Furthermore, Parrots and kakatoes (shit, how do you spell that), all over the place. But highlight was Tetepare, a large untouched island with the most intact rainforest and an eco/research/conservation center. The day started with a snake in the toilet and a snake on the beach (see movie). 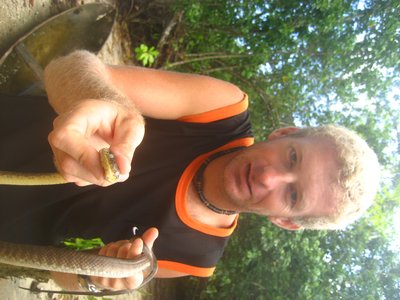 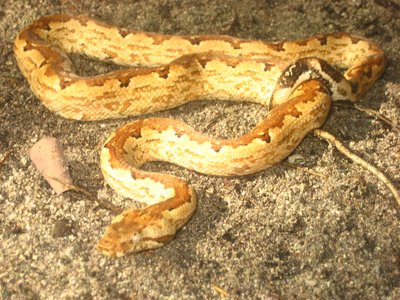 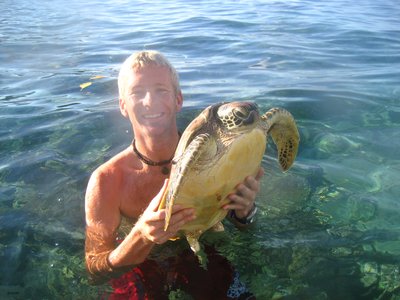 This involves chasing the turtle with a boat, jumping on them, tagging them and putting them back in the water! Poor turtles, but in the end better for them. if this was not enough, a pod of bottlenose dolphins decided to follow us. We jumped in the water and snorkeled with them (see more movies), holding on the boat; amazing. 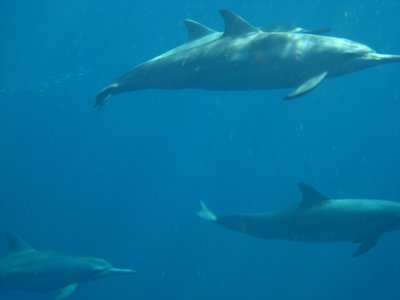 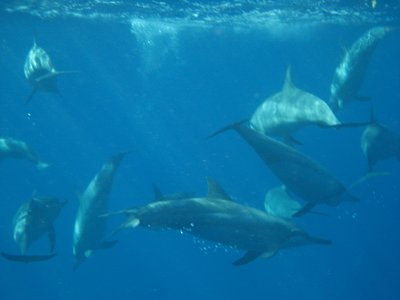 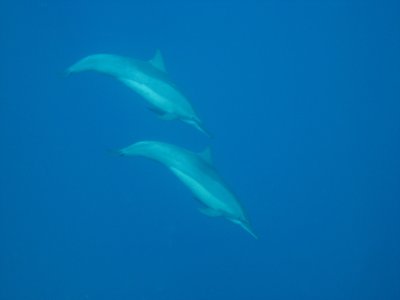 After lunch, some snorkeling with sharks, lion fish and bumped-head parrot fish and an afternoon search for dugong. And yes, what a luck, a large dugong swam by and checked us out a few times (see the last movie of my overheated camera).

Amazing again. I really start to think, fish like me because I do not eat them! The best "water-day" in my live!!!! In the evening hornbills flew over to end a perfect day. This whole day cost 25 euro (for accommodation and fuel!!!!). Unfortunately then dinner followed...

To end, a few more bush lessons:
- Always look in your bed and on the toilet before entering (fire ants like people)
- Attract sharks by making noise with a plastic bottle (or do not attract sharks by not doing this)
- buy a lot of two minute noodles and cookies 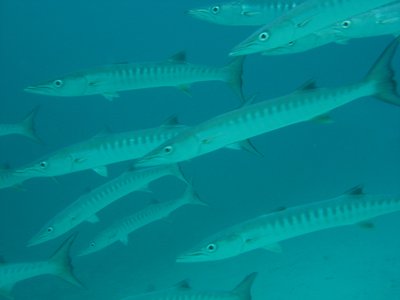 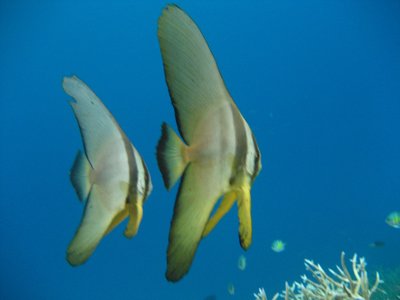 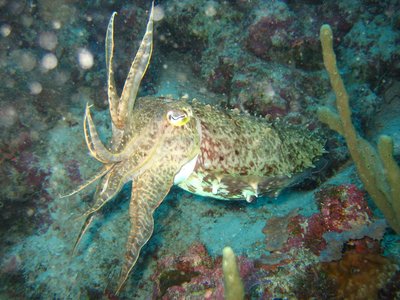 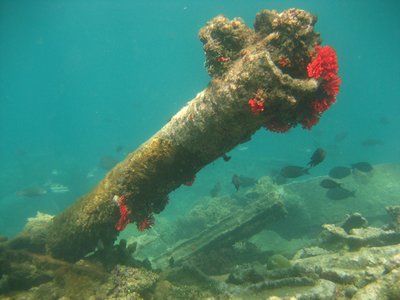 WOII wreck just of the beach

So, off to Papua-New-Guinea now, the only place on earth with a higher coral and fish biodiversity than Solomons...And after all this excitement, I am off to a well deserved skiing holiday in NZ:-)

Previous Next Table of contents

Hey Sander!! Hope you are well and things in New Guinea are working out. YOu have inspired me to place a blog for the Solomons - my impressions are quite different to yours! It's cold and rainy back in Sydney - but still beautiful with many opportunities for outdoor and urban adventures! I have lots of socialising to catch up on.


It was great to meet you - thanks for helping me to swim with sharks! Your pics look great - i'll send you some of the ones I took of you - would be VERY grateful if you could send a couple of the dolphin pics - i don't know how to download them from this site (can you tell me?). Take good care - be wild, be free!! love Anne-Marie

Sander, my dad happens to be (I think) in Honiara right now if you're still around

I really enjoyed reading this blog post. Peter and I (started this here little site) grew up on the Solomons - lived there for about 12 years. Heck, Peter was born there! One of my best friends from when I was a kid should be living in Gizo now and last time I heard from him (via via), he was working at the dive school there.

I don't think you'll ever top that day of underwater life you had in the Solomons. Quite frankly, there can't be many other places in the world that offer that, especially considering all the wrecks around as well! Can't believe you spotted a dugong. My only encounters with those were dead ones washed up on the beach

I can't remember much about the food, but if you eat fish it can be quite good (although you get frightfully bored eating casava all the time!).

As a ps. not everyone in the Solomons is Melanesian and they don't all speak pijin. For example Rennell and Bellona are Polynesian and have their own language and there's quite a few different examples like that (there's at least 60 different languages spoken, although pijin has become the default language for Honiara and communication with foreigners - can't say I remember much nowadays though).

Great blog entry; thanks again for sharing and also for the videos!

by Sam I Am

If you're still in the Solomon islands, please give my blog a visit, I collect flags and have 185 countries so far

This blog requires you to be a logged in member of Travellerspoint to place comments.

If you aren't a member of Travellerspoint yet, you can join for free.